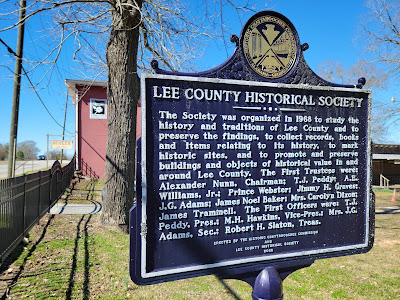 For its February monthly campout, Troop 50 headed north just outside Auburn to Loachapoka — home to Pioneer Park. The Feb. 19-21 campout allowed Scouts to journey back to the area’s late 1880s and early 1900s pioneering traditions preserved on the property by the Lee County Historical Society.
Cooling temperatures greeted Scouts and leaders Friday evening. As they set up camp, pitched their tents and prepared dinner, those temperatures dropped into the 30s — prompting everyone to seek the coziness of their tents and the warmth of their sleeping bags earlier than everyone’s usual bedtime.
Frequent trains on the tracks just across the highway from Pioneer Park broke the campsite’s tranquility throughout the night. Those CSX trains trace back to the Western Railroad of Alabama of the 1850s and 1860s. Saturday’s sunrise led to gradual increasing temperatures — they had dropped to the upper 20s overnight — as the sounds of trains gave way to clucking from Pioneer Park’s chicken coup. Everyone enjoyed their breakfast snuggled in coats and huddled around morning campfires.
Following breakfast cleanup, the troop broke up into two groups to become better acquainted with Pioneer Park. One group followed Dr. Charles Mitchell for a tour of the property. Dr. Mitchell, a retired Auburn University agronomist and professor, currently leads the Lee County Historical Society as the organization’s president after decades of longtime service to the organization. He recounted the history behind many of the buildings, gardens and programs that comprise Pioneer Park and the organization’s past.
The other group made its way to Pioneer Park’s Blacksmith Shop. There, Auburn University professor and experienced blacksmith Dr. Jim Witte shared with Scouts about the art of blacksmithing. He detailed features of a typical blacksmith shop, such as the forge, anvils, tools and the like, as shown in the video above (listen for the train ... here it comes again!). He demonstrated some techniques and discussed the safety issues they present. He also outlined how blacksmithing played a role in the area trade and relations with local Native Americans. The demonstration also introduced Scouts to the opportunity to pursue Metalwork Merit Badge.
During lunch, the troop celebrated the accomplishments of two Scouts toward their advancement. Scoutmaster Andrew Baird and Senior Patrol Leader Will presented Blake and Cooper with their Scout ranks.
After lunch, Scouts got more familiar with some of Pioneer Park’s agricultural efforts through service projects in the McLain Garden and Crops Garden. One group learned about planting potatoes in raised beds in the McLain Garden’s Heirloom Kitchen Garden, while another group cleaned concrete benches where visitors to the garden can sit and enjoy nature. A third group had the more arduous task of clearing out the remains of Pioneer Park’s recent sugar cane harvest in its Crops Garden.
Pioneer Park has been the site of several Troop 50 Eagle Scout leadership service projects. Those include projects to build a fence enclosing the McLain Garden by Camp Steiner (Class of 2019), construct new arbors for the McLain Garden by Jacob Van Horn (Class of 2018), and to develop a new artifact cataloging system and displays for items in the McLain Building by Aiden Lytle (Class of 2017).
Throughout the afternoon, many Scouts wandered over to the Pioneer Park chicken coop to see what all the clucking and commotion was about. The chickens seemed to get more agitated by the parade of their eggs leaving the coop. Several Scouts were under the impression that storing the eggs amid the warmth of their pockets and sleeping bags — and for one Scout, his emergency space blanket — would produce a baby chick. Well, at least it produced the idea of a new troop meeting topic on animal husbandry.
During the afternoon, Assistant Scoutmaster Michael Tullier demonstrated — in a format that fell somewhere between the television programs “Chopped” and “Worst Cooks in America” — how to make Dutch oven apple crisp dessert for their patrols. Each patrol received all the ingredients to replicate the dish — which they later reported turned out better than some of the actual dinner meals they prepared! Again, with overnight temperatures promising to drop to into the 30s this time, Scouts were quick to prepare their meals, enjoy dinner, and clean their dishes so they could huddle around their campfires or seek the warmth of their sleeping bags for the cold evening ahead.
Saturday night: more trains, more cold, more chickens — you get the picture.
After Sunday morning’s breakfast was over and everyone’s gear was packed away, the troop gathered to reflect on all that Scouts accomplished over the weekend. In his role as troop chaplain, Mr. Tullier led the troop in its traditional “Duty to God” devotional service. Together, they reflected on the concept of “daily bread” that is part of the “Lord’s Prayer,” and what that concept looks like in our daily lives.
During the troop’s Patrol Leaders’ Council meeting the following Monday, youth leaders positively rated the Pioneer Park campout — giving high marks to patrol menu planning, Pioneer Park activities and its service project opportunities. They did note that more could be done to emphasize teamwork within the patrols and the troop, as well as specific functions like being better organized in setting up tents and dining flies upon everyone’s arrival. Those needs would be part of upcoming troop meeting programs.
The troop continues to camp locally, wearing facial coverings and maintaining physical distancing as part of observing pandemic-era public safety protocols.
For more photos of the Pioneer Park campout, visit the troop’s online photo album.
at March 20, 2021