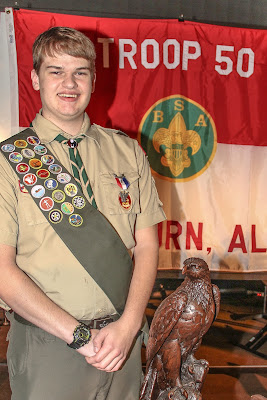 On Saturday, Jan. 12, Troop 50 bestowed the Boy Scouts of America’s highest rank during a ceremony honoring new Eagle Scout Jacob Van Horn. He is the son of Eric and Rebecca Van Horn, currently residents of Opelika. Jacob is the troop’s 19th Eagle Scout since its founding in 2012.


An honor guard of Troop 50 Scouts led Jacob to the stage, where Troop Committee Chair Rob Stanford led him in the reaffirmation of the principles of the Scout Oath. He then reminded Jacob of the obligations of being an Eagle Scout — namely, living with honor, loyalty, courage, service and vision.

Following this, Scoutmaster Baird administered the “Eagle Scout Charge,” officially marking Jacob as an Eagle Scout. Jacob’s mother, Rebecca, pinned his Eagle Scout medal on his uniform, and his father, Eric, presented him with an Eagle Scout neckerchief. In turn, Jacob presented his parents with lapel pins noting their new status as Eagle Scout parents. Along with receiving a framed Eagle Scout certificate from Mr. Baird, Jacob received from Mr. Tullier a certificate of membership in the National Eagle Scout Association (NESA) — a gift from the troop.

Jacob closed the ceremony with some personal word of thanks, and special presentation of Eagle Scout mentor pins to those who played a special role in his progress toward earning Scouting’s highest rank. Those receiving mentor pins included Mr. Baird, Mr. Stanford, Andrea Holliday, Dan Strickland, Paxton Brittle, Kal Busman and Wes Fanning.

Originally a member of Troop 158 in Tulahoma, Tennessee, Jacob joined Troop 50 in September 2016 after his family relocated to the Lee County area. During his tenure in Troop 50, he served as patrol leader, lead troop guide, senior patrol leader, junior assistant scoutmaster, and currently serves as an assistant scoutmaster. Through his Scouting participation, he earned 22 merit badges and was named one of co-recipients of the troop's 2018 James J. Baird Jr. Honor Scout Award . He was also elected for membership in the Order of the Arrow, Scouting’s national honor society, and now serves as the Chattahoochee Lodge’s camping promotions chairman.

For his Eagle Scout leadership service project, Jacob planned and led volunteers to reconstruct two new arbors in the garden area of Loachapoka’s Pioneer Park. Family, friends, and fellow Scouts and leaders logged more than 259 service hours planning and constructing the project. The new arbors, as well as new curb Jacob and volunteers replaced adjacent to the arbors enhance the experience and safety for visitors to the park’s garden.

Outside Scouting, Jacob volunteers by building sets and costumes for Auburn Area Community Theater productions. He plans to attend Auburn University this fall, where he will major in electrical engineering.