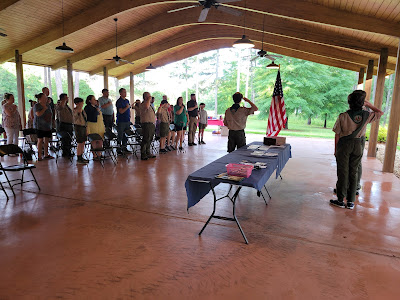 On Monday, June 7, Troop 50 families gathered at Auburn University’s Mary Olive Thomas Demonstration Forest to celebrate Scouts’ advancement efforts during the spring. The troop’s spring court of honor also marked the transfer of responsibility to a new group of youth leaders who will serve in leadership roles during the second half of the year.

The court of honor was the last troop function Will presided over as senior patrol leader. He welcomed families and led a traditional opening that included the Pledge of Allegiance, Scout Oath and Law, and a prayer. Assisted by Assistant Senior Patrol Leader Jake, he also presented advancements earned by Scouts in the spring — which included eight ranks and 20 merit badges.

Continuing its tradition, the troop also celebrated Will’s service as senior patrol leader during the spring. Scoutmaster Baird presented Will with a hand-carved neckerchief slide — a recognition item he’s bestowed on outgoing SPL’s since the troop’s founding in 2012, including Will’s older brother and past SPL Camp.

The spring court of honor represents a pause in weekly troop meetings for the summer, but the troop will still remain active during the summer. Troop Committee Chair Rob Stanford announced that the troop is considering a summertime opportunity to reschedule its annual planning retreat, which was postponed in April due to weather.

A contingent led by assistant scoutmasters Matt Podemski and Christian Dagg will depart June 15 for the Northern Tier High Adventure Base, Scouts BSA’s premier experience for canoeing and winter camping. The five-person crew will spend a week canoeing the biodiverse waterways of the Northern Boreal Forest unique to Northern Minnesota and Canada.

Another group will enjoy a traditional summer camp experience at Camp Sequoyah in north Alabama located in the foothills of the Appalachian Mountains and on the edge of Talladega National Forest; Camp Sequoyah is a wilderness destination steeped in Scouting Spirit and the beauty of Northeast Alabama.

At its weekly meeting prior to the court of honor, the troop hosted elections for membership in the Order of the Arrow. Scouts who were elected will learn of their election either while attending summer camp or through some other manner prior to Chattahoochee Lodge’s Aug. 6-8 Summer OA Induction weekend.

The troop anticipates resuming its weekly meeting schedule in August.