Eight from Troop 50 inducted into the Order of the Arrow 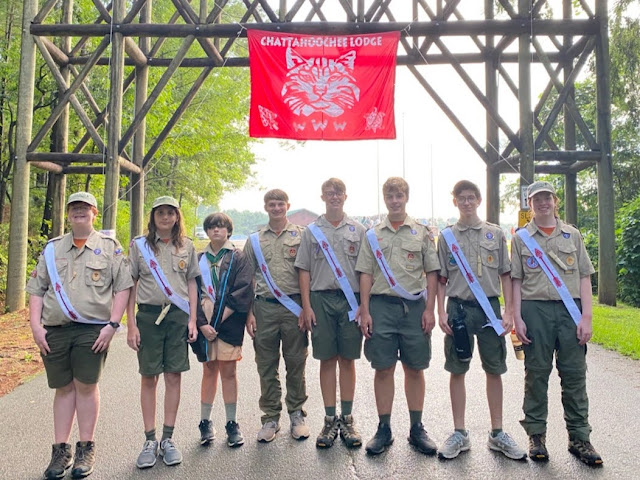 For more than 100 years, the Order of the Arrow, or "OA" — also referred to as Scouting's National Honor Society — has recognized Scouts and leaders who best exemplify the Scout Oath and Law in their daily lives. Arrowmen, as members of the Order of the Arrow are known, are regarded for maintaining camping traditions and spirit, promoting year-round and long-term resident camping, and providing cheerful service in their troops and beyond.
Order of the Arrow activities occur through a lodge, which is affiliated with a local Scouting council. Scouts elected for Order of the Arrow membership participate in an “Ordeal” weekend, where candidates for membership participate in reflective experiences around leadership and cheerfully complete service projects alongside OA members. This year’s class of Order of the Arrow inductees included eight Troop 50 Scouts who attended the Chattahoochee Lodge’s induction weekend Aug 6-8 at Camp Frank G. Lumpkin in LaGrange.
Pictured above, they were (left to right) Harrison, James, David, Harrison, Jake, Hunter, Connor and Rhett.

Those elected for OA membership are typically informed of their selection during a “callout ceremony” in a summer camp setting. The ceremony, like all Order of the Arrow activities, center around the organization’s preservation of Native American traditions and heritage. Many of the troop’s candidates elected at the troop’s spring court of honor participate in a callout ceremony at Camp Sequoyah. Others learned of their pending OA membership as part of their Northern Tier High Adventure trek.

The Order of the Arrow is a co-ed organization and includes youth and adults from Scouting, Venturing and Sea Scout units. From local lodges to national leadership positions, the OA is considered a youth-led, adult-advised organization. Therefore, youth members must be under the age of 21 to be elected. Scouts must be at least First Class in rank; have at least 15 nights of Scout camping, including one, but no more than one, long-term camping experience consisting of at least five consecutive nights of overnight camping (usually a summer camp); and receive an affirmative vote of a majority of their unit peers (including Scouts who aren’t OA members). Adults (age 21 or older) who meet the camping requirements may be nominated by the troop committee.
at August 28, 2021