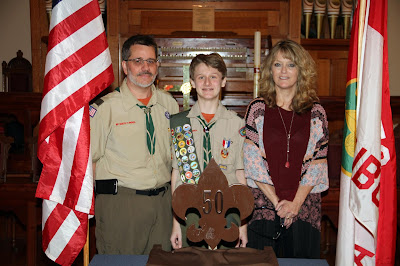 On November 5, Boy Scout Troop 50 bestowed the Boy Scouts of America’s highest rank during a ceremony honoring new Eagle Scout Aiden Brian Foreman Lytle. He is the son of Harry “Billy” and Barbara Lytle of Auburn.


Current Senior Patrol Leader Jacob opened the court of honored, followed by several of Aiden's fellow Scouts — Louie, Liam, Everett, Joe and Rusty — reminded those in attendance of the meaning of the colors that comprise the American flag, not to mention the Eagle Scout badge. Scoutmaster Andrew Baird then presided over the ceremony, which included the recitation of the narrative reading entitled "100 Scouts."


The new Eagle Scout then expressed words of appreciation to his family, friends and fellow Scouts in attendance, especially those who had assisted him on his journey to achieving the Eagle Scout rank and with his Eagle Scout project. Aiden singled out those adults who he considered to be mentors along that path and presented each with an Eagle Scout mentor pin. They included Mr. Baird, his father, Assistant Scoutmaster J.P. Pendleton, Troop Committee Chair and his former cubmaster Rob Stanford, and Mr. Tullier (who also served as his Eagle Scout project coach and as the troop's chaplain).

Aiden joined the Boy Scouts in 2014 after earning Cub Scouting’s Arrow of Light. As a member of Troop 50, he has served in leadership positions that have included troop chaplain’s aide and lead troop instructor. Through his Scouting participation, he has earned 29 merit badges to date, qualifying him for a bronze Eagle palm at the time of his ceremony. He also has accrued 53 nights of camping, 103 hours of community service, and 38 hiking and backpacking miles.

For his Eagle Scout leadership service project, Aiden enhanced the display of historical items in the Lee County Historical Society’s McLain Building. This included cataloging undocumented historical items; identifying, tagging and photographing more than 450 uncatalogued items; and constructing a wooden bench to provide visitors with seating on the building’s front porch. His project accrued 129 volunteer hours from planning to completion, including the 46 hours he spent personally planning, leading and supervising the various stages of the project.

Currently, Aiden is a ninth grader at Auburn Junior High School and is a member of Auburn United Methodist Church.