It should be no surprise in December that Troop 50 Scouts look forward to two things — advancement awards and Christmas presents. The troop’s annual December court of honor failed to disappoint on Monday, Dec. 18, when Scouts gathered with their families for the presentation of merit badges and ranks, as well as a spirited “Dirty Santa” gift exchange. The court of honor featured the presentation of seven rank advancements and 38 merit badges — the majority earned during the troop’s recent Veterinary Medicine Merit Badge class at Auburn University’s College of Veterinary Medicine, and Merit Badge Day.


In addition to installing the troop’s newly elected youth leaders, Mr. Baird administered the oath of office to the troop’s growing cadre of junior assistant scoutmasters: (left to right) Louie, Aiden, Nicky and Creighton. The troop promotes Scouts to this advanced level of leadership following their completion of the Eagle Scout rank, but before they would be old enough to serve in an adult position. Aiden and Creighton — by virtue of their continued merit badge work beyond the presentation of their Eagle Scout ranks earlier in the year — also received Eagle palms during the ceremony.


Mr. Baird made two additional presentations to close out the evening’s court of honor. The first was a handmade neckerchief slide, which he presented to Jacob. The neckerchief slide has become his traditional means of recognizing outgoing senior patrol leaders for their terms of service. 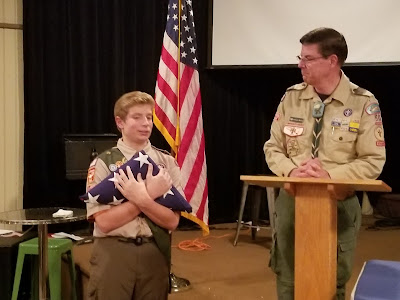 His second presentation was to incoming Senior Patrol Leader Rusty — the American flag that honored Mr. Baird’s father during his funeral service in October 2017. A veterinarian by training, Dr. Charles Baird graduated with a doctorate in veterinary medicine from Auburn University in 1960, served in the U.S. Air Force, and practiced as a veterinarian for more than 50 years. Mr. Baird noted that his father would have wanted to know the flag was being used to benefit others, so he asked SPL Rusty to ensure it is part of the troop's instructional activities, including training newer Scouts about flag etiquette and the ceremonial procedures that are part of the earlier rank requirements Scouts are required to complete.

The pomp and circumstance of the court of honor quickly gave way to the annual madness associated with the troop’s “Dirty Santa” gift exchange. Among the traditional gifts of camping implements and supplies, knives and flashlights were a few oddities — including $9.95 in various coins that was frozen in a block of ice. 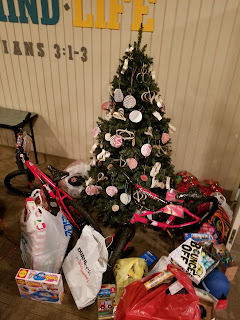 In addition to celebrating Christmas as a troop family through the yearly game of “Dirty Santa,” Troop 50 families also remembered others through its annual toy-collection drive. Bicycles, athletics gear, games and other toys were among the gifts donated by troop families and walked by Scouts and leaders to the main City of Auburn fire station on East Magnolia Avenue. This annual troop service project benefits the firefighters’ “Toys for Tots” drive and dates back to the troop’s first Christmas court of honor after its founding in November 2012.

The court of honor concluded the troop’s scheduled 2017 events. The troop will take a hiatus until its first meeting of the new year on Monday, Jan. 8.

For more pictures from the court of honor, visit the troop's online photo album.
at January 09, 2018