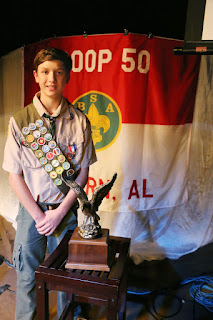 On Sunday, Nov. 1, Troop 50 Scouts and leaders gathered at Auburn United Methodist Church with family and friends of Andrew Stanford to celebrate his attainment of the rank of Eagle Scout. Andrew's ceremony celebrated not only his completion of Scouting's highest rank, but the many friendships he has made through Scouting, as well as his active involvement in Auburn United Methodist Church's youth and choir programs and the Auburn High School marching band program.


The next portion of the program included several narrative readings relevant to Scouting and the Eagle Scout rank — each read by someone of significance to Andrew's personal and Scouting development. The first of those, Significance of the Eagle, read by Troop 50 Assistant Scoutmaster Wes Williams, recounted the eagle's role in symbolizing royalty, power, victory, authority, and valor, as well as its revered status by Native Americans, Christians, Americans, and Boy Scouts. Michelle Stearns, director of AUMC's Elevate Youth Choir, read the poem An Eagle Scout. And finally, Seth Almond, an Eagle Scout in Troop 11 and fellow member of the AHS marching band, recited 100 Scouts, which outlines how Scouting influences any given group of 100 boys who become Scouts. Ultimately, only four of those 100 will earn the rank of Eagle Scout.


While Alabama State Representative Mike Hubbard, who serves as the speaker of the house, narrated The Trail to Eagle as the "Voice of the Eagle," Andrew's friends, fellow Scouts, and leaders challenged Andrew to remember Scouting's influence on his life by sharing memories from his Scouting experiences. Assistant Scoutmaster JP Pendleton, who was Andrew's Pack 29 den leader, shared of Andrew's days as a Cub Scout. George, a member of Troop 15, told stories of his and Andrew's summer camp experiences at Camp Daniel Boone. Longtime friend, Eagle Scout, and member of Troop 15 Joe Farrow, who because of a U.S. Naval Academy commitment shared by video how much Andrew's friendship had meant to him and how Andrew inspired him to stay involved in Scouting. Chartered Organization Representative Michael Tullier, who in addition to knowing Andrew since his Cub Scouting days also coached Andrew's soccer team and worked with him through AUMC's youth programs, shared of Andrew's Scouting experiences by "returning" to Andrew "lost and found" items collected from Andrew's Scouting adventures. Longtime Scouting friend Kyle shared memories of their mutual Scouting experiences, especially those that followed their co-founding of Troop 50. Finally, Will, another fellow Troop 50 founder and Eagle Scout, shared memories from his and Andrew's 2013 trip to Philmont as part of Expedition 617-R.


Scoutmaster Baird began the presentation of the rank of Eagle Scout by issuing the Eagle Charge and Promise to Andrew, who was joined by other Eagle Scouts in attendance. Andrew presented Eagle Scout parent pins to his parents, Rob (who also serves as the troop's committee chair and previously served as cubmaster for Andrew's Cub Scout pack) and Lysha. His mom pinned on him the Eagle Scout medal, and his father exchanged his regular neckerchief slide with a new Eagle Scout one. Mr. Tullier presented Andrew with, on behalf of the troop, membership in the National Eagle Scout Association.


The honoree then shared his appreciation with everyone for attending the court of honor, as well as to those who assisted with his Eagle Scout leadership service project at Pick Elementary School. His remarks also included the presentation of mentor pins to those adults who who shaped his Scouting experience and mentored him along the way to earning the Eagle Scout rank. Andrew presented mentor pins to Assistant Scoutmaster JP Pendleton, Chartered Organization Representative and Assistant Scoutmaster Michael Tullier, Scoutmaster Andrew Baird, and his father and Troop Committee Chair Rob Stanford. AUMC Associate Minister Charles Cummings concluded the court of honor with a closing prayer.