Serving to afford educational opportunities for others 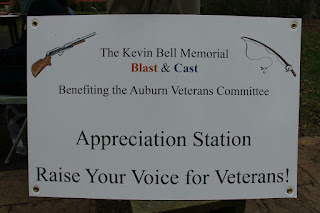 On Saturday, Nov. 7, Troop 50 Scouts and leaders trekked just outside Auburn to Waverly to provide volunteer support for the 7th annual Kevin Bell Memorial Blast and Cast. As it has in the past, the troop manned two stations — tomahawk tossing and slingshot-shooting — as part of the 15 total stations that pit four-person teams against each other in marksman and outdoor sports feats testing their abilities to shoot slingshots, clays, tactical shotguns, pistols and rifles, as well as throwing tomahawks and knives. 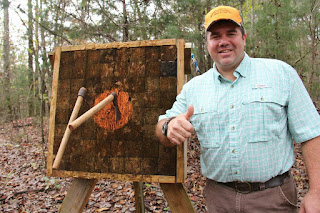 The tomahawk station tested teams' ability to not only hit a stationary target roughly 12 feet away, but with the precision and force required to cause the tomahawk to stick. Scouts assisted teams by retrieving thrown tomahawks and offering tips on throwing techniques. During the downtime as teams transitioned between stations, troop leaders tried their hands as perfecting multi-tomahawk tosses — efforts that seemed to improve throughout the course of the morning. 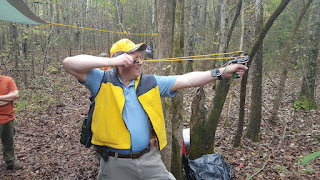 At the slingshot station, teams tested their marksmanship skills by shooting slingshot marbles and paintballs at various stationary and moving targets. Not only were some targets in excess of 20 feet away, many also required careful aim past trees and through branches to score points. Scouts served as "caddies" by holding their slingshot ammunition as well as keeping each shooter's score.

The event has raised funds annually since 2009 in honor of its namesake, Kevin Bell, As a result of this and past efforts, the Blast and Cast has endowed a scholarship in Auburn University's College of Education as well as funded scholarships awarded by the Auburn Veterans Committee and benefiting veterans or their dependents pursuing degrees at Auburn-area post-secondary educational institutions. The 2014 Blast and Cast resulted in a contribution of $6,500 in support of Auburn Veterans Committee scholarships.


Kevin Bell, the son of Debbie Allen, passed away in 2010 at the age of 29 after a 22-year battle with Friedreich's Ataxia, a neurological disorder which robbed him of the ability to walk and write by age 11. Having earned two degrees at Auburn and serving as a substitute teacher at Auburn High School, family and friends chose to create scholarships in his name as a means of perpetuating Kevin's own love of education. This year's event also paid tribute to two long-time supporters of the Blast and Cast who passed away in 2015: Col. Andrew LaMar Jr., the father of Blast and Cast organizer Andy LaMar; and Frank "Buddy" deGraffenreid, who served previously as the City of Auburn's chief of police.

For more information about the scholarship fund, visit the fund's page on Facebook, and for more photos from the event, visit the troop's online photo album.
at November 10, 2015