Paying tribute to the victims of war 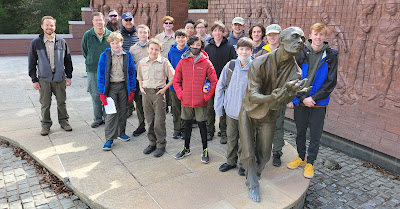 The troop left Auburn on Saturday, Nov. 6 for a two-day campout and visit to the Andersonville National Historic Site in Andersonville, Georgia. The site, managed by the National Park Service, gives visitors a glimpse into the plight of prisoners of war—especially those Civil War Union soldiers detained behind enemy lines by the Confederate Army. The visit coincided with the nation’s annual Veterans Day observance on Nov. 11.
The Andersonville National Historic Site includes several historic properties: the National Prisoner of War Museum; the site of Camp Sumter, the most infamous of Civil War-era Confederate prisons; and the Andersonville National Cemetery. The park’s historic trail questionnaire helped guide the contingent's journey through Civil War history by challenging Scouts to glean facts from displays and kiosks throughout the site.

The troop began its walking tour at the National Prisoner of War Museum, which since opening in 1998, has told the story of POWs throughout American history. Visitors are met with an exhibit answering the question “What is a POW?” Hands-on and multimedia displays following that introduction explore themes of capture, living conditions, news and communications, morale and relationships, and escape and freedom. 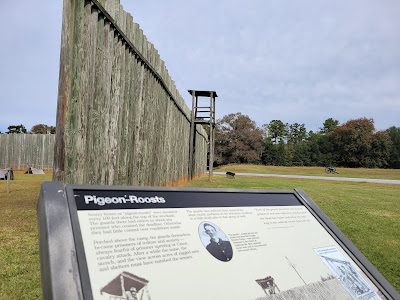 The next stop on the historic hike was the site of Camp Sumter, also known as Andersonville Prison. The historic prison site is comprised by 26.5 acres outlined with double rows of white posts to indicate the location of the original prison walls. Two sections of the stockade wall have been reconstructed—the north gate and the northeast corner. In walking the grounds, Scouts and leaders learned more about the living conditions faced by those imprisoned there, their efforts to escape, and by browsing the various monuments on the property, the number of Union POWs who lost their lives as war prisoners.
After lunch, the troop returned to the stockade area, where in service to the park, they constructed prisoner-style lean-to structures using some of the same materials that would have been available to Union POWs of the day. These shelters would have been what POWs called home and where they would have sought refuge from the sweltering Georgia sun and heat, as well as rain and cold. The troop divided into thirds to put their creativity to the test—along with their construction and knot-tying skills. 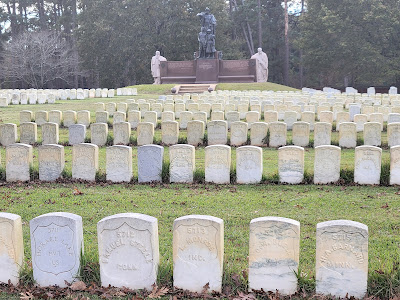 Following their shelter-building efforts, the troop resumed its historic fact-finding hike in the Andersonville National Cemetery. Initial interments, beginning in February 1864, were trench burials of the prisoners who died in the nearby military prison. Today the cemetery contains nearly 20,000 interments—including the nearly 13,000 soldiers who died during their imprisonment at Camp Sumter. The cemetery is one of 14 administered by the National Park Service and remains open and active for burials. Scouts took an interest in the variety of symbols used on headstones to represent religious beliefs and personal philosophies.
The troop returned to its campsite (they made a brief stop upon their arrival in Andersonville to set up camp and personal tents) to ready for dinner. It’s always a great time when we can celebrate special occasions and milestones during campouts. This campout, the Leadership Corps helped Jackson’s 14th birthday with a hearty helping of cherry cobbler (complete with whipped cream, of course!). Following dinner, some of the troop gathered around a roaring campfire, while others headed to bed to insulate themselves for the evening temps in the 40s (and the extra hour of sleep the change in Daylight Savings Time promised).

Sunday’s devotional program, led by assistant scoutmaster and chaplain Michael Tullier, centered on mission statements—especially the troop’s, which ascribes to “gather young men into a quality Scouting program, grow them into servant leaders, and go into the community in service and fellowship.” Scouts and leaders focused on personal and biblical perspectives of “servant leadership” and how the troop fulfills it through its activities, service projects and personal activities.

At part of its post-campout critique, the troop's Patrol Leaders Council the following Monday classified the campout as “smooth” and “well-run.” They liked the campout’s educational aspects, complimented Scouts on their quick campsite setup, and overall good menu-planning and preparation. They did note a lacking depth of patrol leadership, but especially credited Wizard Lizards Patrol Leader Beck for his leadership of the troop’s combined patrol over the weekend. They also said they would have benefited from more time in the park and museum.

For more photos from the event, visit the troop's online photo album.
at November 10, 2021