Backpacking adventures on the Pinhoti 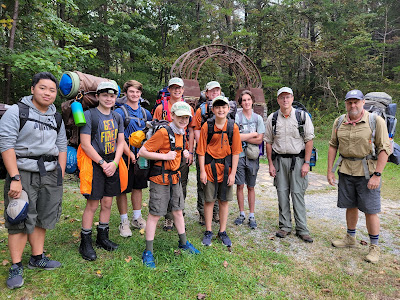 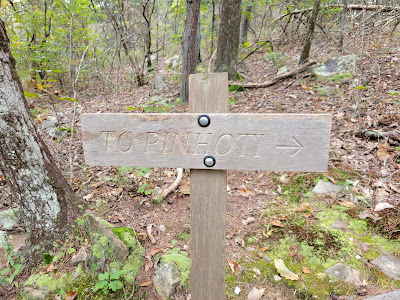 On Saturday, Oct. 2, a crew of 11 Troop 50 Scouts and leaders trekked north for two days of backpacking the Pinhoti Trail—part of the Talladega National Forest near Cheaha State Park. Although the trail is a frequent part of the troop’s annual outing and backpacking activities, it was the first visit—and the first backpacking trip ever—for some of our Scouts. By late Sunday morning, the troop logged a total of 7.7 miles: 5.7 miles on Saturday and 2.0 miles on Sunday.
The 339-mile Pinhoti Trail meanders through Alabama and Georgia, with 172 of those miles located in Alabama. It starts at Flagg Mountain, cuts through the Talladega National Forest, and ends in Northeast Georgia at the Benton MacKaye Trail. The Benton MacKaye Trail connects into the Appalachian Trail.
Subscribing to the "pack-in, pack-out" philosophy, each Scout and leader carried his own personal gear and tent, as well as a portion of the weekend’s food, cooking, water filtration, and other gear divided among the backpackers.
Trail lunches always feature a variety of food items designed to replace burned calories, provide a boost of energy and help the group tackle the afternoon portion of the day’s trek. Saturday’s lunch was no exception. The Wizard Lizards enjoyed a traditional selection of trail mix, granola bars, Slim Jims and crackers—while many in the Gladiators Patrol had their first taste ever of Spam (the jury is still out on if the group emptied the can out of enjoyment of the savory selection or simply out of desperation and hunger!).
Although rocks, trees and other elements of nature are expected when hiking in a national forest, the remains of a plane crash are not as common. Unfortunately, the higher elevations and sometimes treacherous weather of North Alabama have resulted in several airplane crashes on and around the Pinhoti Trail. One such incident that has gained notoriety occurred in 1972 at McDill Point, and since it is logistically impossible to remove many of the remains of these crashes, the remains of that crash still exist.

While the McDill point plane crash site provided for some site-seeing, Saturday’s clouds did interfere with the scenic views for which the Pinhoti Trail is known. With not much to see in the skies until the clouds cleared, the troop witnessed a variety of colorful lichen, fungus and other growth on trees, rocks and trail surfaces.
Clear skies did emerge by late afternoon. Temperatures remained pleasant throughout the trip, even into the evening, which can get rather chilly on the upper ridges in the fall. While rain was in the Sunday’s forecast during the time the troop would be making its way out of the forest, it made an earlier-than-expected 3 a.m. arrival.
Backpacking trips are essential to Scouts’ camping experience, as they require some adaptation to traditional camping processes and practices. For example, Scouts on the backpacking trip had to pack extra drinking water for the trail and filter creek water for drinking, cooking and dishwashing as it became available. The group carried portions of the equipment needed to cook—backpacking stoves, pots and food items—that are normally available in patrol chuckboxes. And, of course, food ingredients had to be nonperishable and lightweight.
Aided by members of the Leadership Corp, the Wizard Lizards stuck to a traditional backpacking dinner of black beans and rice with summer sausage. The Gladiators, under the culinary watch of Assistant Scoutmaster Christian Dagg, blew out all the stops with an inventive trail take on macaroni and cheese—followed up by a Sunday breakfast of pancakes. That had some of the Wizard Lizards (including the adult leaders) looking forlornly on as they stuck with their breakfast of oatmeal and granola bars.

Early to bed was the post-dinner theme Saturday evening, and early to rise as well on Sunday—with a persistent drizzle of rain greeting the troop. Despite that inconvenience, the troop packed up quickly, held its traditional Sunday morning camping devotional service, and returned to the trail by 10 a.m. for the last leg of its trek and the return home.

For more photos from the backpacking trip, visit the troop’s online photo album.
at October 08, 2021