A campout of historic proportions

On the eve of Horseshoe Bend National Military Park's bicentennial celebration of The Battle of Horseshoe Bend, which effectively ended the Creek War of 1813-14 and made Andrew Jackson a national hero, Troop 50 set out to leave its mark on history by creating a historic trail questionnaire at the park. The questionnaire, when available to park guests, will enhance the park experience by drawing visitors to the various historic information markers throughout the park, as well as the visitors' center and other landmarks. Webelos from Pack 29 who will soon crossover, as well as their parents, joined the troop for the day.

The troop started the questionnaire course at the visitors' center, where there exists a treasure trove of information in exhibits, displays, dioramas, and a movie documentary. Park rangers also modeled and explained military attire from the period, as well as demonstrated a musket firing.

Scouts gleaned additional information for the questionnaire from informational displays at points along the park’s nature trail. These markers along the nearly five-mile trail documented and overlooked key locations of the battle and the location of the Red Stick Creek’s log barricade. 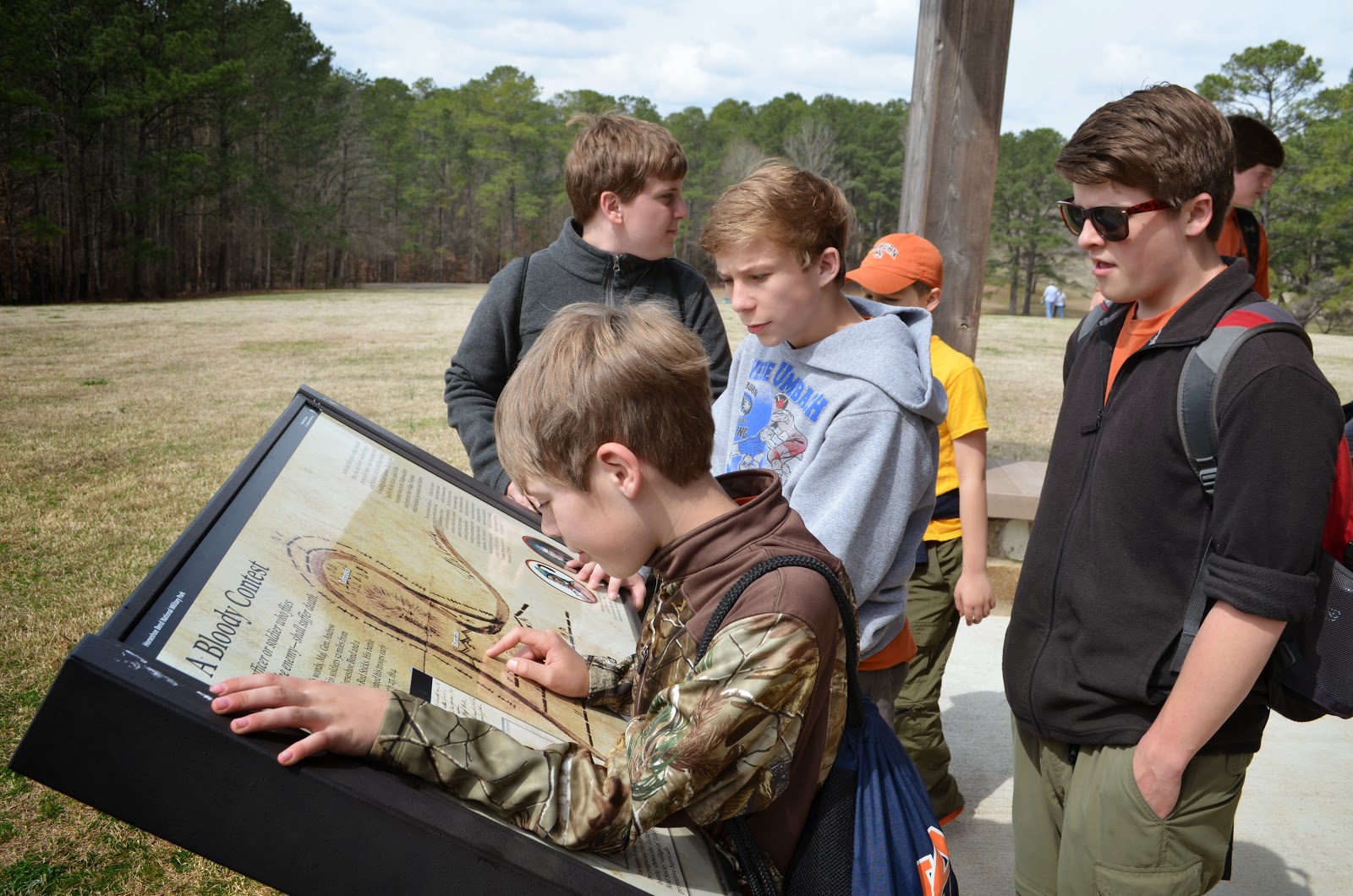 At three stops along the way, the troop also designed skills activities for Scout visitors to attempt. The first of these, which the troop developed at its lunch stop, challenges visitors to measure the distance across the Tallapoosa River. The second, a compass course at the Tohopeka village site, provides various coordinates for visitors to plot in finding the endpoint of the course. The third skill requires scouts to measure the height of the pavilion at the village overlook. These were skills the troop worked on refining during the meetings prior to the campout.

At the conclusion of the Horseshoe Bend hike, the troop returned to Wind Creek State Park, where it had camped the previous evening and was spending a second night. In separate groups, Scouts and leaders prepared dinner before readying for an evening promising a 100-percent chance of rain. Rain set in around 10 p.m. and remained steady throughout the night — making it by far the wettest campout the troop has experienced to date. By the morning, the rain reached deluge status, requiring the troop to make an orderly but quick exit from camp. While the rain presented challenges, members of the Patrol Leaders’ Council, in analyzing the campout, admitted that it revealed ways to be better prepared for the next rain-soaked campout.

The troop will finalize the historic trail questionnaire over the next few weeks, in conjunction with National Park Service staff, with the intent of having the trail added to the nationally approved list of BSA Historic Trails. The historic questionnaire will be made available to anyone who visits the park, while the Scout skills section can be used by troops to meet First and Second Class rank requirements that deal with hiking and using a compass. Troop 50 hopes to leave a legacy for Scouts to enjoy for years to come.

Check out more photos from the campout in the troop's online photo album.