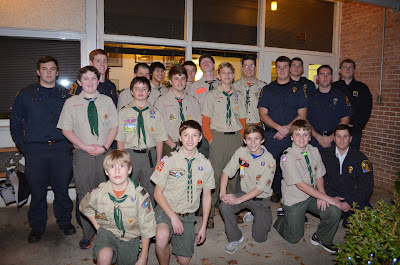 In the spirit of the Christmas season, Troop 50 "wrapped up" its first full year as a troop with its now-annual Christmas Court of Honor and Party. Scouts, leaders and families gathered in Baird Hall at First Presbyterian Church Monday evening to celebrate the accomplishments of individual Scouts and newly elected youth leaders, not to mention the spirit of the Christmas season with a gift exchange and toy donation drive. At the end of the meeting, the troop trekked to the Auburn Fire Department downtown station to present (as pictured above) the many toys donated by Scouts and their families.

Also in the spirit of giving, the troop hosted a Friends of Scouting presentation, offered by Saugahatchee District Executive Alan Spencer. Friends of Scouting is the annual fundraising drive by the Chattahoochee Council that offers Scouting families the opportunity to invest in local programming, services, and facilities offered by the council. Later in the meeting, Mr. Spencer reported that Troop 50 families donated or pledged nearly $1,700 in charitable gifts to the council for the coming year.

During the court of honor portion of the evening, Scoutmaster Andrew Baird, Senior Patrol Leader Andrew, and Assistant Senior Patrol Leader Vincent presented a number of rank advancements to Scouts, as well as merit badges earned through troop meetings and the recent Saugahatchee District Advance-a-Rama.


Scoutmaster Baird also recognized the outgoing leadership efforts provided by SPL Andrew and ASPL Vincent. Each received a framed certificate, troop patch and the position patch for the positions in which they served throughout the fall.

Fun and games were next on the agenda, and Scouts (along with Mr. Baird) swap and "stole" gifts in a game of "Dirty Santa." Among this year's gifts were a Bruster's gift card hidden among leaves and a bag of coal in a box, a pooping reindeer Christmas decoration (which no one seemed to want to take from Mr. Baird), camping items, and a pair of straw eyeglasses, which went home with Andy. The troop followed the gift exchange by splitting into patrols for a game of Scouting-themed Jeopardy. Categories included topics such as "Tying it Up" (knots), "Dress the Part" (uniforming) and "Paging Dr. Boy Scout" (first aid).

At the end of the meeting, Mr. Baird congratulated everyone on their achievements for the year. This included the troop achieving, in its first year of eligibility, the status of being a "Gold Unit" in the Boy Scouts' "Journey to Excellence" program. The JTE program is the measure of a unit's progress and success during the year in such areas as advancement, membership, training, camping, service, parental involvement and budgeting -- and the gold level is the highest level a unit can achieve. The troop concluded the evening by walking down to the fire station to deliver its donated toys.

Visit the troop's online photo album to view all the photos from the Christmas Court of Honor and Party.
at December 17, 2013