The Sunday of our Camp Jack Wright campout was all about fulfilling the component of our troop's mission to go out in the community in service and fellowship. The troop woke up to a moist start, after listening to the drip of Saturday's rain falling from the trees through the night. After patrols enjoyed and cleaned up after breakfast, the troop return its appreciation to the camp by conducting a service project with conservation benefits to the camp. The trail to Campsite 3 lacked the gravel cover most of the major paths throughout camp have, resulting in unstable trails and mud puddles. Scouts moved gravel to shore up the first third of the trail where (as Saturday's rain helped reveal) the trail was most subject to accumulating water and mud. 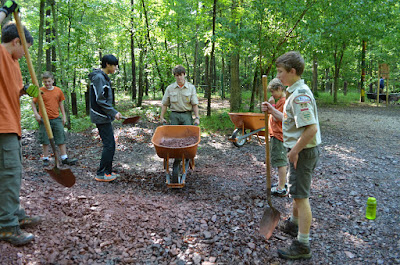 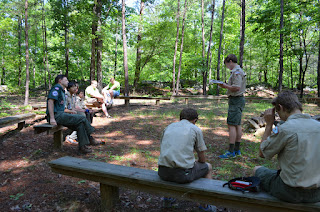 After Scouts cleaned up after the conservation project and gathered their personal gear, the troop returned to Class A uniforms for its traditional Sunday Scouts' Own service. The service, under the direction of Chaplain's Aide Davis, included an opening prayer by Andrew and closing prayer by Robert. The devotional Davis selected reminded Scouts and leader about the power of prayer and trusting God to help in our most difficult and troubling times. Scoutmaster Andrew Baird closed the service by offering some history of the camp, which included the gift of land by Jack Wright, and the leadership shown by "Chief" Zack Cross in developing the infrastructure upon which the camp functions today. He noted that Chief Cross was a Scouting leader and positive influence on him during his time as a Scout in the Birmingham area's Greater Alabama Council, w. Mr. Baird also noted the influence his former Order of the Arrow lodge, Cherokee Lodge #50, had on the selection of the numeral 50 as our troop number when the troop formed last fall. 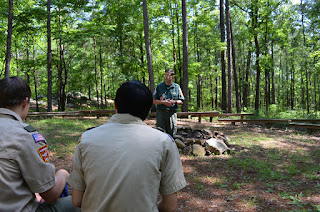 Check out photos from Sunday and the entire weekend campout in our online photo album. Special thanks to our troop instructor, Vincent, for taking some photos throughout the weekend. We'll be sharing those in the coming days in addition to what's already uploaded.

With the upcoming annual troop retreat on May 18, there will be no Patrol Leaders Council Monday evening as traditionally held after campouts.

Finally, Troop 50 moms, thanks for loaning us your Scouts this weekend. We hope once they cleaned themselves up and aired out their gear, you all had a wonderful Mother's Day afternoon and evening. Thanks to each of you for making Troop 50 a special family for our Scouts and leaders.
at May 12, 2013