Gazing at the stars (and the planets) 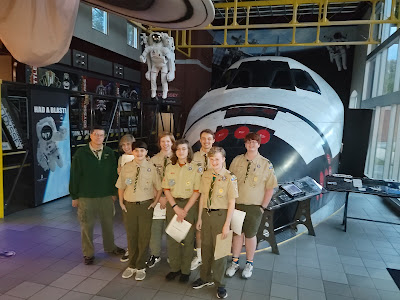 On Saturday, Nov. 5, the troop headed to nearby Columbus, Georgia, for one of the regularly scheduled Astronomy Nights hosted by the Coca-Coca Space Science Center, one of Columbus State University’s educational outreach centers. The evening’s activities gave participating Scouts a starting point—a launchpad if you will—to completing the requirements for Astronomy Merit Badge.
Prior to the official start of the evening’s program, Scouts browsed the center’s exhibit gallery, which features over $17 million in NASA artifacts from the Space Shuttle era—including a Space Shuttle Main Engine Nozzle that has flown to space on nine NASA missions. These items represent the most extensive collection of space shuttle artifacts in Georgia. The gallery also includes four flight simulators and numerous interactive displays, all presenting content directly from state and national science standards.
Dr. Rosa Williams, a professor in Columbus State University’s Department of Earth & Space Sciences and director of the center’s WestRock Observatory, began the evening’s program in the Omnisphere Planetarium. The planetarium’s show highlighted some of the constellations and other celestial objects available for viewing in late fall evenings.
Following the planetarium show, and despite the cloudy evening, Scouts looked up to the night sky on the center’s South Lawn, where they could view the waxing gibbous moon and Jupiter amid the clouds. They even got their own VIP group simulator experience as they flew to the International Space Station aboard the Space Shuttle Odyssey.
Scouts concluded their visit in the center’s WestRock Observatory. Dr. Andrew Puckett, an associate professor in the Department of Earth & Space Sciences, described the functionality of the center’s observatory and research-grade telescope. He also detailed some of the observatory research led by faculty, students and alumni and relating to moon, sun and other celestial body observations.
Established in 1996, the Coca-Cola Space Science Center is Georgia’s only science center and museum facility dedicated to providing experiences for students and public visitors in astronomy and space science. A key teaching and research facility for Columbus State University’s Department of Earth & Space Sciences. the center hosts and maintains the computer server that houses an internationally recognized supernova database for astronomical research.
For more photos, visit the troop’s online photo album.
at November 27, 2022