This spring, Troop 50 bestowed the Boy Scouts of America’s highest rank during a ceremony honoring new Eagle Scout Hunter Thurow. He is the son of Brian and Jennifer Thurow of Auburn. Thurow is the troop’s 26th Eagle Scout since its founding in 2012. His Eagle Scout ceremony was held on Sunday, Feb. 20 at Auburn United Methodist Church.
Hunter’s Eagle Scout ceremony, held at Auburn United Methodist Church was a joint ceremony also honoring Miles Ballard, the troop’s 25th Eagle Scout. The two have been longtime friends both in and outside Scouting. The ceremony on Sunday, Feb. 20 included fellow Scouts, leaders, family and friends. Senior Patrol Leader Connor oversaw the presentation of colors, followed by welcomes from Scoutmaster Andrew Baird. The ceremony included a reading of the “Trail to Eagle” by Miles’ grandfather, John Ballard, as well as the “Eagle Scout Challenge” by fellow Scouts that reminded everyone of the symbolism behind the colors of the Eagle Scout badge, the significance of the Scout Oath and Law in our daily lives, as well as the foundation they have and will provide Hunter.
Scoutmaster Baird oversaw the official presentation of the Eagle Scout rank to Hunter. This included administering the “Eagle Scout Charge” and the “Eagle Scout Promise.” Hunter’s parents joined in the presentation of the insignia marking his achievement of the Eagle Scout rank, and Hunter in turn presented both of his parents with Eagle Scout mother’s and father’s pins. On behalf of the troop, Troop Committee Chair Rob Stanford presented Hunter with membership in the National Eagle Scout Association — a tradition dating back to the troop’s first Eagle Scout in 2013.
Following tradition, Hunter recognized several special leaders and adults with Eagle Scout mentor pins, which signify the special roles they played in his advancement efforts and in completing his Eagle Scout leadership service project. These mentors included former Assistant Scoutmaster and Cub Scout Pack 29 leader Clyde Wikle; assistant scoutmasters Michael Tullier and Wes Williams; Eagle Scout leadership service project coach J.P. Pendleton; Troop Committee Chair Rob Stanford; Scoutmaster Andrew Baird; and his parents Brian and Jen Thurow.
Hunter's grandfather, C.T. Thurow, concluded the Eagles Scout ceremony with a closing prayer.
Hunter's "Trail to Eagle"
Hunter joined Troop 50 in April 2015 after earning the Webelos Rank and Arrow of Light in Cub Scout Pack 29, charted by Auburn United Methodist Church. During his tenure in Troop 50, he has served in several leadership positions including instructor, patrol leader, lead troop guide, and assistant senior patrol leader. He earned 26 merit badges, which also later qualified him for a Bronze Palm. During his tenure in Troop 50, he accrued 61 nights of camping, 78 service hours (outside his own Eagle Scout leadership service project), 82 hiking miles and eight paddling miles. In August 2021, he was inducted into the Order of the Arrow, Scouting’s national honor society.
For his Eagle Scout leadership service project, Hunter planned and led volunteers to enhance and refurbish the nature trail at Yarbrough Elementary School, where he was a student. In addition to improving the trail bed itself, the project encompassed restoring and replacing species-identification markers for trees on the trail. Family, friends, and fellow Scouts and leaders logged around 90 service hours planning and carrying out the project.
After completing the Eagle Scout rank requirements, which included planning and executing his service project, Hunter appeared before the Saugahatchee District’s Eagle Scout Board on Sept. 12, 2021. He is among four Troop 50 Scouts to earn the Eagle Scout rank during 2021.
Hunter graduated in May from Auburn High School. He begins his studies at Auburn University during the Fall 2022 semester. 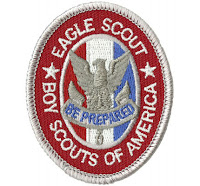