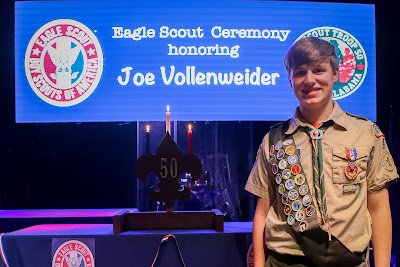 On Sunday, Nov. 24, Troop 50 bestowed the Boy Scouts of America’s highest rank during a ceremony honoring new Eagle Scout Joseph Vollenweider. He is the son of Glen and Margaret Vollenweider of Auburn. Joe is the troop’s 20th Eagle Scout since its founding in 2012.

After the formal awards presentation, Joe then shared words of thanks to those in attendance, as well as to those who had supported his Scouting efforts since his time as a Cub Scout. Following tradition, Joe recognized several special leaders and adults with Eagle Scout mentor pins, which signify the special roles they played in his advancement efforts and in completing his Eagle Scout leadership service project. These included a posthumous presentation to John Cottier, his Cub Scout den leader, which his wife, Randy, received on his behalf. Other honorees included assistant scoutmasters Wes Williams and Christian Dagg, Scoutmaster Andrew Baird, and Troop Committee Chair Rob Stanford. The ceremony concluded with a benediction from Auburn United Methodist Church's senior pastor, Rev. Cory Smith.

Joe joined joined Troop 50 in April 2014 after earning the Webelos rank and the Arrow of Light as a Cub Scout in Pack 29. During his tenure in Troop 50, he has served in several leadership positions leading up to patrol leader, lead troop guide, assistant senior patrol leader, senior patrol leader, and his current position as junior assistant scoutmaster. Through his Scouting participation, he earned 26 merit badges and was elected for membership in the Order of the Arrow, Scouting’s national honor society.

For his Eagle Scout leadership service project, Joe planned and led volunteers to build a larger debriefing space at the Auburn University Challenge Course. Family, friends, and fellow Scouts and leaders logged more than 72 service hours planning and constructing the project. The new debriefing area features six foldable benches that alternate between being serving as benches for the debriefing area and as picnic tables for groups participating in the challenge course.

Joe is an 11th grader at Auburn High School, where he is active in the Engineering Club and Technical Student Association. He and he parents worship at Auburn United Methodist Church, where he is an active leader of the church’s Youth Group and member of the Youth Choir.