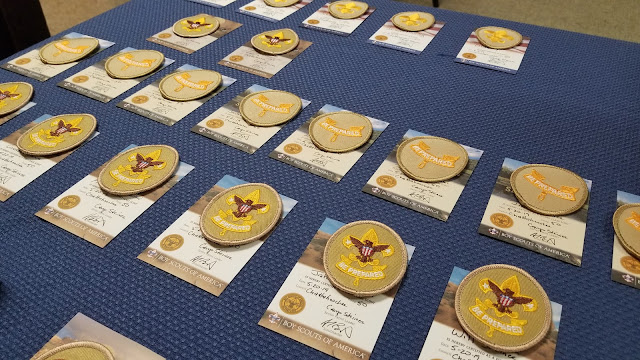 At its spring court of honor on Monday, June 10, Troop 50 celebrated the advancement success of its Scouts, which included 18 Scouts advancing in rank and 15 earning at least one merit badge since the troop’s December 2018 court of honor. The evening’s event also included the induction of new youth leaders and other individual recognitions.

Outgoing Assistant Senior Patrol Leader Hunter called the court of honor to order and led the group in the traditional opening of the Pledge of Allegiance, Scout Oath, Scout Law and Outdoor Code. Dinner, featuring a taco bar with all the fixings, followed.

The court of honor program resumed after dinner with the presentation of ranks, which spanned the awarding of the Scout rank to several Scouts who recently crossed over from Webelos, to the Life rank. As Hunter announced Scouts to be recognized, outgoing Lead Troop Guide Joe handled the duties of distributing the ranks and congratulating Scouts on their accomplishments. Hunter and Joe continued in their duties as the troop bestowed a total of 29 Eagle-required and elective merit badges, as well as Firem’n Chit and Totin’ Chip awards.


At the troop’s June 3 meeting, Scouts elected a new slate of youth leaders for the second half of 2019. Scoutmaster Andrew Baird administered the oath of office to those Scouts, which included:


Scoutmaster Baird also presented the troop’s annual James J. Baird Jr. Honor Scout Award. First presented in 2015, the award is bestowed on the troop's “top Scout” based on his participation in troop activities, demonstration of Scout skills, continuing advancement success, and a vote of his peers. The award honors the memory of Jim Baird, the uncle of Scoutmaster Baird, a 1945 recipient of the Eagle Scout rank and longtime Rotarian leader. This year’s honoree was outgoing Senior Patrol Leader Camp, who will be presented the award at the troop’s next court of honor since he was unable to be present due to previously scheduled travels.

The troop concluded the awards program with a variety of other recognitions, including the election of Tyson and Will to the Order of the Arrow at the troop’s June 3 meeting. The Order of the Arrow, or “OA” — also referred to as Scouting's National Honor Society — recognizes Scouts and leaders who best exemplify the Scout Oath and Law in their daily lives. Arrowmen, as OA members are known, are regarded for maintaining camping traditions and spirit, promoting year-round and long-term resident camping, and providing cheerful service to others. Tyson and Will will be invited to attend an upcoming OA induction weekend, and after their successful participation, will become official OA members.

Scoutmaster Baird also highlighted the service provided by several adult leaders. These included new assistant scoutmasters Matt Jordan and Joe Lovvorn. He also bestowed a special handmade neckerchief slide to his son Davis who, while a college student, has served as an assistant scoutmaster, especially during vital times when additional last-minute adult leadership was needed. Davis, an Eagle Scout, will be graduating from Auburn University soon and beginning his service in the U.S. Air Force.

Additional photos from the court of honor are available in the troop's online photo album.

The June 10 court of honor is the troop’s final Monday-night activity for the summer. It will resume its regular meeting schedule with a Patrol Leaders’ Council meeting on Monday, Aug. 5, and its next troop meeting on Monday, Aug. 12. In the meantime, Scouts and leaders will travel to Camp Rainey Mountain in Clayton, Georgia, for summer camp the week of June 23, followed by its annual “Chill at the Lake” family outing on Saturday, July 27.