Thursday at Camp Rainey Mountain is referred to as free range Thursday since there are no merit badge classes and the scouts are free to pursue different activities during various blocks throughout the day. Some troops take advantage of the proximity to several whitewater venues and head off property to go rafting. Troop 50 stayed in and the boys headed out in various directions. Due to the number of troops leaving camp on Thursday morning, the flag ceremony and breakfast were also modified. The running of the flags did not occur, which disappointed some of our more energetic scouts. 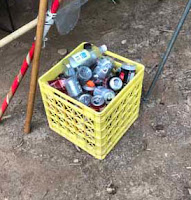 Within our campsite, we have a couple of coolers filled with Gatorade and soda. I have already commented on the teamwork required to keep them iced. We have also been running our own recycling program for the bottles and cans, along with the occasional cardboard box. Since there is a First Class requirement that promotes recycling, we have been promoting it on campouts but we went all in for this week. We have a milk crate that serves as the single stream recycle container. When it becomes full, the boys then remove the caps from the bottles and rinse out all of the bottles and cans at the latrine before sacking it up to transport back to Auburn. This exercise has also been a way to teach them what belongs in a recycle bin and what does not. Some of our scouts have been throwing random trash into the crate in an apparent belief that all trash was recyclable.

The hike up to Big Rock was promoted to the troop as a way to meet one of the Eagle-required, Camping merit badge requirements, in which one must hike a trail with an elevation change of at least 1000 feet. The boys who did not already have Camping merit badge were eager to check off that requirement but the other (read older) scouts opted out of the hike citing other commitments such as qualifying at the rifle range, working on the Chess merit badge, or participating in a cooking competition. All of these are noble pursuits and they were excused, even the ones who actually spent the free time on the trading post porch with the WiFi. The newest scouts were doing an extended five mile hike as part of meeting a Second Class requirement so they went on the hike as part of their TNT patrols with Mr Dagg accompanying them. Mr. Chism and Mr. Lovvorn accompanied the main group from the troop to make sure that I didn't get lost again.

I was quite taken with the speed in which the crew hiked up the trail. They passed two other groups en route and didn't stop for a break until we reached the top of the mountain. The trail then made a steep drop down to the top of Big Rock. It has a rope line strung along one point to assist in getting up and down that part of the trail. When we got to Big Rock there was another group admiring both the view and the cell signal. We waited patiently until they cleared the top of the rock and then took the obligatory group photo.


Once we cleared the area and got back to the top of the mountain, it was all downhill from there, so to speak. The trip down was accomplished with similar speed, although the proximity to lunchtime may have had something to do with it. We made it back to the dinning hall with time to spare, however.

The TNT scouts did not appear for lunch but I found out later that they not only made the hike in fine form, they cooked their own lunches of cheese quesadillas after their return to camp. Oliver and Jackson both commented on the fine quality of their respective dishes.

Following lunch the scouts went full free range. Some chose to enjoy the sunshine playing frisbee on the parade field. Some went swimming while others worked to earn some extra badges that were offered as part of the single day program. Gideon and Gordon were eager to try out the Blob. This is a large vinyl bag inflated with air that floats in the lake. One person jumps onto the Blob from a tower above, climbs out to the other end, and lays flat on the top. Then a second person jumps from the tower. This pushes the air towards the other end and launches the first person into the air to land in the water. Given the weight difference between them, Gideon was launched high into the air in spectacular fashion.

I would be remiss if I didn't note the obligatory ga-ga ball pit at the camp. During the first three days of camp, the bottom of the pit was quite muddy. This did not stop scouts from playing ga-ga ball and getting absolutely head to toe muddy while doing it. I never saw any of our scouts in the muddy pit but I know some who seriously contemplated it. On Wednesday, a load of sand was dumped alongside of the pit and I did see at least one Troop 50 scout playing in the sand pile. Since the sand has been spread within the pit, there has been a nonstop game of ga-ga going, possibly 24 hours a day. Last night we almost had to drag one of our scouts bodily from the pit as rain and lightening  threatened.

Free range Thursday is also free of dinner in the dining hall. Some troops prefer to go to town for pizza but we decided to stick with cooking hobo meals in the campsite. The dining hall staff issued us the ground beef, potatoes, carrots, onions, and cabbage along with the foil to wrap it all up in. We used the fire pit in the campsite to ignite a giant pile of charcoal, overseen by Battalion Chief Lovvorn, while other scouts chopped up the vegetables. Then all of the scouts put their meals together in the foil packets and laid them directly on top of the charcoal. The adults opted to put the ingredients into our Dutch oven for a tasty meal of Lithuanian goulash. The meal was capped off with a watermelon. Although the foil and plastic forks could be thrown away after the meal, there was still a great deal of detritus left on the ground, including potatoes, carrots, onions, and about a hundred thousand watermelon seeds.

We barely finished our clean-up before the aforementioned storm blew in. Due to the lightening, we confined the scouts to the Adirondacks until it passed. They did not seem to mind. Some went on to sleep while a card game of Exploding Kittens Uno (please do not ask me to explain that, I have no idea) raged in another. I'm also told that movie night occurred in a third Adirondack courtesy of the Nintendo Switch. The storm finally passed and thus ended the night.

Photos from free range Thursday are available at this link.