Flying back in time 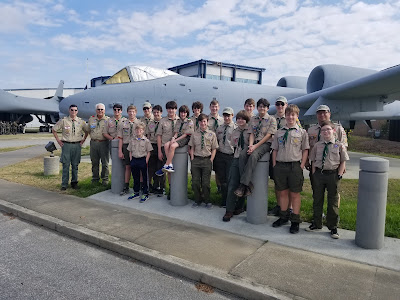 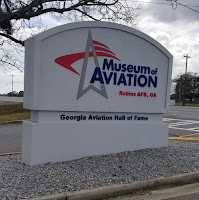 During the weekend of Feb. 16-18, Troop 50 Scouts and leaders took a step back in time with a visit to the Museum of Aviation, situated on 51 acres adjacent to Robins Air Force Base in Warner Robins, Georgia.

Prior to visiting the museum, the troop settled into its campsite at nearby Camp Benjamin Hawkins — a 500-acre camp maintained by the Central Georgia Council. Despite arriving at the campsite around 8:30 p.m. Eastern Time, everyone worked cooperatively and quickly to get dining flies and tents set up, and gear distributed in a reasonable time frame. 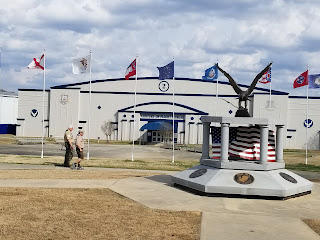 The troop woke Saturday morning, and after the patrols’ respective breakfast cooking, Scouts and leaders assembled for the quick bus ride to the Museum of Aviation. The museum opened to the public in November 1984 with 20 aircraft on display in an open field and another 20 in various stages of restoration. It now includes four large exhibit buildings that house some of the museum’s 85 historic U.S. Air Force aircraft, missiles, cockpits and award-winning exhibits. It is a place that honors our veterans and their families and reminds our airmen of their legendary Air Force heritage. Home to the Georgia Aviation Hall of Fame, the facility has grown to become the second-largest museum in the U.S. Air Force and the fourth most-visited museum in the Department of Defense. 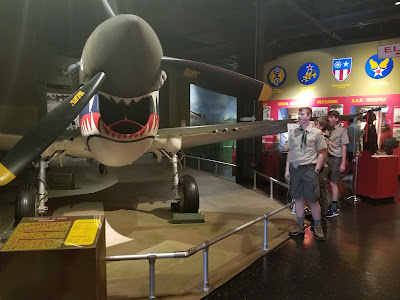 Many Scouts opted for self-guided tours of the museum, while others tagged along with Scoutmaster Andrew Baird and Assistant Scoutmaster Davis Baird who served as the troop’s personal docents. Each Baird shared his knowledge of aviation history and aircraft with their tour groups. The troop paused its tour of the museum for a picnic lunch on the museum grounds, and then resumed their visit for another few hours after lunch.

The troop returned to Camp Benjamin Hawkins by late afternoon in time to begin preparing for dinner. In addition to their dinner preparations, patrols also prepared a variety of entertaining skits, songs and other attempts at entertainment for the campfire program later that evening. With the troop being the only ones in camp that evening, the general public was spared the calamity some Scouts called “singing” during the campfire.


Following breakfast on Sunday, the troop gathered for its traditional devotional service before departing camp. Troop Chaplain Michael Tullier led a discussion of how we must keep our spiritual life on course in the same way we do when using a map and compass if we want to end up where we should. Scouts reflected on how family, friends, adults, religious leaders and the Bible all contribute to keeping us on course — or helping us correct our course when the troubles and temptations of life cause us to deviate from the right path.

At the Patrol Leaders Council meeting the Monday following the campout, youth leaders praised many of the elements of the campout. Top on their list were the campsite and museum themselves, as well as everyone’s efficiency setting up camp Friday and breaking down camp Sunday. Many credited new troop quartermaster Camp for his efforts to coordinate the distribution and storing of troop equipment. Everyone also added Saturday night’s campfire program to the weekend’s highlights. With the idea of more new Scouts joining the troop during the next several months, youth leaders noted the need for increased attentiveness to younger Scouts (especially to what — or rather, how much — they eat) on future campouts.

For more photos from the Museum of Aviation campout, visit the troop’s online photo album.
at March 01, 2018