Summer 2017 was a busy time for Scouts and leaders of Troop 50, evidenced by the wide array of accomplishments recognized at the troop's post-summer court of honor on Monday, Aug. 28. In addition to presenting Scouts with their recently earned merit badges and ranks, the troop celebrated many of the other events and achievements that marked our Scouts' summer experiences.

Thanks to Scouts' hard work, the troop awarded 62 merit badges at the court of honor — the majority of which were earned by Scouts attending summer camp in June at Camp Sequoyah in north Alabama.

Between June 17 to July 2, members of Boy Scout Troop 50, comprising the majority of Philmont Crew 620-B, set out on a two-week excursion traveling to and backpacking the trails of Philmont Scout Ranch, the Boy Scouts of America's largest national high adventure base, located in Cimarron, New Mexico. Check out photos and tweets from the excursion on the troop's blog and Twitter account.

Seventeen Scouts and leaders from the Auburn/Opelika area — including Creighton, Rusty, Trey, Liam and Assistant Scoutmaster Wes Williams — attended the 19th National Boy Scout Jamboree, held from July 19 to July 28 at the Summit Bechtel Reserve in West Virginia. They were among the 68 scouts and leaders divided between two jamboree troops representing the Chattahoochee Council. More than 30,000 Scouts and leaders attended the national gathering, which is hosted every four years at the Summit Bechtel Reserve by the Boy Scouts of America.

Order of the Arrow elections 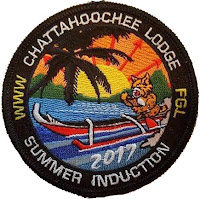 Following the Order of the Arrow election held at the troop's spring court of honor, newly elected OA candidates were recognized, or "called out," in a variety of locations as being elected for Scouting's National Honor Society. During the weekend of Aug. 4-6, the elected Scouts, along with Assistant Scoutmaster Christian Dagg, who had been selected for OA membership by the troop committee, participated in the Order of the Arrow's summer induction weekend, called an Ordeal, at Camp Frank G. Lumpkin in LaGrange. Read more about their OA experience on the troop's blog.

The summer court of honor also allowed the troop to honor its most recent recipient of the James J. Baird Jr. Honor Scout Award, Nicky, who was unable to attend the spring court of honor when this year's honoree was announced. First presented in 2015, this award is given annually to the troop's "top Scout" based on his participation in troop activities, demonstration of Scout skills, continuing advancement success, and a vote of his peers. The award honors the memory of Jim Baird, the uncle of Scoutmaster Baird, a 1945 recipient of the Eagle Scout rank and longtime Rotarian leader.

Additional photos from the troop's summer court of honor are available on the troop's online photo album.
at September 18, 2017