A Scout is helpful 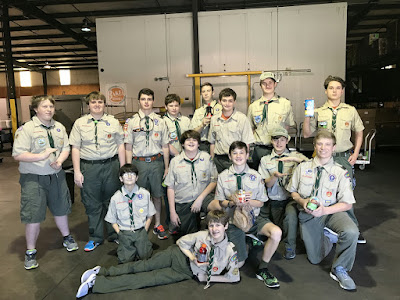 On Saturday, Feb. 25, Troop 50 Scouts, leaders and parents joined with others throughout the Saugahatchee District to participate in the annual Scouting for Food drive benefiting the Food Bank of East Alabama. This year's drive represents the fourth year that the troop has provided the Food Bank with on-site support during the Scouting for Food effort.

While Cub Scout packs and Boy Scout troops went door to door throughout the county collecting food left on doorsteps and by mailboxes, Troop 50 staffed the Food Bank and readied to receive, unload and sort the thousands of pounds of food expected Saturday morning. As Scouts waited for those deliveries, they assisted Food Bank staff with repackaging the bulk food shipments it received into smaller boxes that would be picked up by the organizations that distribute food on behalf of the Food Bank to the less fortunate.

The Food Bank is a centralized warehouse that stores and distributes donated and purchased perishable and nonperishable food items. It distributes food to low-income people through member agencies, such as food pantries, soup kitchens, shelters and other programs that serve the ill, needy and infants.The Food Bank works to reduce food waste, feed hungry people and raise public awareness of issues related to food and hunger.

As packs and troops began arriving with the food donations they collected, Troop 50 mobilized teams to unload the donated food, weigh it as part of the Food Bank's receiving process, then sort it into various categories that make storage and distribution by Food Bank volunteers and staff easier. By the conclusion of the Scouting for Food drive, the Food Bank had received 5,045 pounds of donated food.

For more photos from the troop's time at the Food Bank, visit our online photo gallery.
at February 28, 2017