Troop 50 Scouts, leaders and families gathered for the troop's traditional December court of honor and Christmas party. As a result of our growing troop family, there weren't many empty seats in First Presbyterian Church's fellowship hall!

As part of his efforts to complete the requirements for Communications Merit Badge, newly selected Assistant Patrol Leader Liam served as master of ceremonies. After welcoming everyone in attendance and opening the court of honor with the Pledge of Allegiance, Scout Oath and Scout Law led by Senior Patrol Leader Creighton, and an opening prayer by Chaplain's Aide Aiden, those in attendance enjoyed a meal prepared by the troop's families.

After reconvening the court of honor, Liam — assisted by SPL Creighton and Assistant Senior Patrol Leader Louie and accompanied by Scoutmaster Andrew Baird — presented six rank advancements. Following the rank presentations, Liam recognized Scouts for earning nearly 30 merit badges — most of which were the result of the troop's Merit Badge Day the previous Saturday or the completion of partial requirements remaining from summer camp.

Scoutmaster Baird then honored Creighton for his term of service as senior patrol leader with a custom-made neckerchief slide and display case.


After the conclusion of the court of honor, Scouts and some of the troop's adult leaders gathered for the coveted and highly contested game of "Dirty Santa." Although there were 28 individual gifts in play, the theme of the evening seemed to be flashlights, based on the half dozen or so that were secreted away in gift bags and wrapped boxes. A foldable camp stool was the first frequently stolen gift to be frozen.

The troop ended the evening by gathering gifts donated by Scouts' families for the City of Auburn's Public Safety Department's annual toy drive. This annual troop tradition is part of its yearlong community service efforts. Scouts and leaders walked dozens of items including sports equipment, bicycles, electronics, and other toys to the city's downtown fire station, where firefighters accepted the toys and posed with the troop in front of one of its fire trucks. 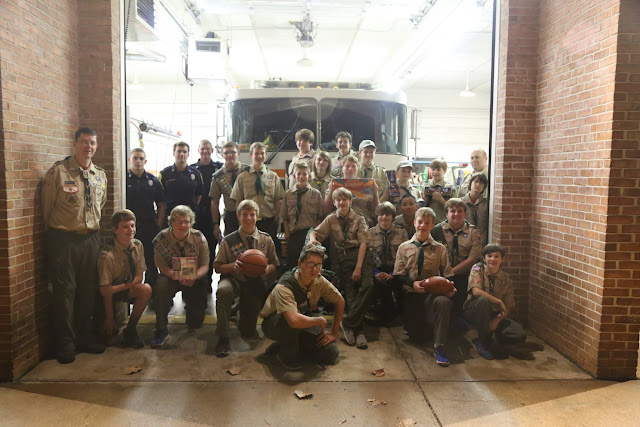 Since this was the troop's final event of the 2016 calendar year, the troop will resume its weekly meeting schedule on Jan. 9, 2017.

For more photos from the court of honor, please visit the troop's online photo album.
at December 13, 2016