Troop 50 Scouts and leaders celebrated the Veterans' Day weekend by centering its monthly campout around a visit to the U.S. Army Aviation Museum—which also served as the site of the troop's first out-of-town outing after its founding in 2012. 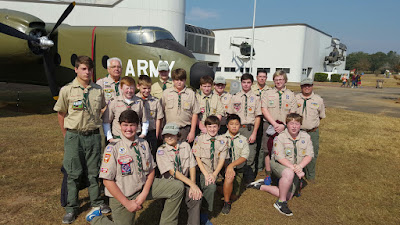 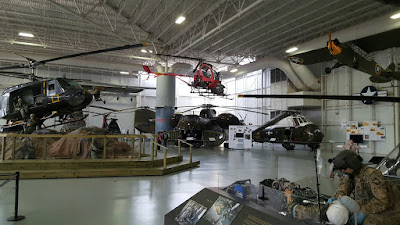 The U.S. Army Aviation Museum, located at Fort Rucker in Enterprise, Ala., maintains a collection of more than 160 military aircraft, including one of the largest collections of military helicopters in the world. Scouts has the opportunity to browse the approximately 50 beautifully restored, historic and one-of-a-kind aircraft displayed both inside the museum and on its surrounding grounds. Since first opening in 1968, and since moving into its current facility in 1989, its public galleries have offered a retrospective of the Army's involvement in military aviation, as well as provides the the human side of Army Aviation by featuring photo galleries, memorabilia and photo essays that capture the human spirit of the Army's proud aviation heritage. 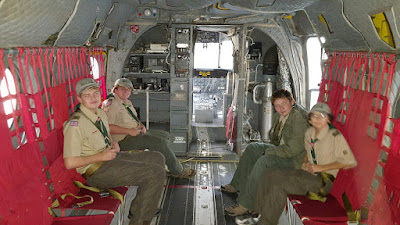 While most Scouts opted for a self-guided tour (which included visits to the museum's flight simulators and gift shop), a few Scouts dropped in periodically for the museum tour directed by the troop's resident historian, Scoutmaster Andrew Baird. Actual and replica aircraft document the beginning days of Army aviation with the Wright brothers and the early combat aircraft of World War I, up to the highly technological machines such as the AH-64 Apache and the UH-60 Blackhawk flown by Army aviators today.


After touring the museum and enjoying a picnic lunch on the museum's grounds, the troop made its way to its campsite at Blue Springs State Park in nearby Clio, Ala. Scouts had the opportunity to enjoy some downtime after setting up their tents before beginning dinner preparations as the early sunset cast the campsite in darkness by 5:30 p.m. While it was dark, local fire bans due to extreme drought conditions forced the troop to conduct its "campfire" program around a Coleman lantern. Campfire master of ceremonies and Assistant Senior Patrol Leader Louie persevered and provided everyone in attendance a program full of skits, songs, and fellowship.


It's unclear if the fact that the days are getting darker earlier had any impact on how early the Scouts retired for the evening. However, by 10 p.m., most Scouts (and leaders) were settled in for the evening's cooler temperatures, which dropped to roughly 50 degrees.
Scouts were slowly bounding out of their tents by 6:30 a.m. Sunday as they readied breakfast and began packing their gear. Before departing the campsite for the return trip home, the troop gathered for a Sunday devotional service, Chartered Organization Representative and Troop Chaplain Michael Tullier. With Thanksgiving less than two weeks away, the scripture readings and discussion centered around being thankful in all circumstances—during the times we find ourselves extremely blessed, as well as the times we are challenged and the valuable lessons we learn during those times.
At the troop's monthly Patrol Leaders Council meeting the following Monday, the troop's youth leaders noted that, while the museum left a little to be desired for some Scouts, everyone enjoyed the campfire program and the campsite location..
For more photos from the campout, visit the troop's online photo album.
at November 15, 2016