The gift of music at Pick Elementary

Students at Pick Elementary School have a whole new way to make joyful noise thanks to another Troop 50 Eagle Scout Service Project. Kyle, a founding member of Troop 50 and aspiring Eagle Scout, planned and built an outdoor music classroom for students, complete with his stations featuring drums, cymbals, chimes, shakers and a PVC pipe xylophone. The space not only provides the school's music teacher with a music-focused outdoor educational space, but the site provides teachers of other subjects with alternative outdoor classroom space and students with an optional recess area.

Kyle's project is the fourth in a series of Troop 50 Eagle Scout projects at Pick Elementary School, which also include a pair of raised planter beds, a nature trail and outdoor classroom, and a creek-side observation deck. As part of his project planning, Kyle researched various instruments and different building materials that would be beneficial for making different types of sound. He worked with music teacher Caleb Doster and physical education teacher Charles Cooper to obtain the necessary permissions and conceptualize the outdoor music classroom. Michael Tullier, the troop's chartered organization representative, served as his Eagle project coach.

After presenting his project idea to and having it approved by Saugahatchee District's Eagle Board in November 2015, Kyle began the physical work on the outdoor music classroom site work in February 2016 by clearing the area of small trees and brush. During two weekends in April, Kyle and a group of volunteers created the structures for the instrument stations and the instruments themselves. Stations include metal trash can drums, a PVC pipe xylophone with washboard, metal pipe chimes, plastic bucket drums with metal trash lid cymbals, and tree stumps originally designed for seating, but as later discovered, more opportunities for students to express themselves rhythmically. 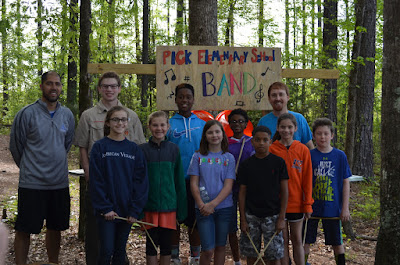 Because many of the troop's past Eagle projects were completed during summer breaks, Kyle had a unique opportunity to reveal his completed project site to the school's faculty and teachers during a school day. On Wednesday, April 20, Kyle — joined by his parents, Art and Melissa Sullivan; Scoutmaster Andrew Baird; and Mr. Tullier — unveiled the space to the school's principal, Debbie Brooks; Mr. Doster; Coach Cooper; and several of the school's students. In addition to Coach Cooper serving as Kyle's PE teacher in kindergarten and much of his time as a student at Cary Woods Elementary School, Mrs. Brooks also served as principal during Kyle's studies at Cary Woods. Auburn City Schools later featured Kyle's efforts on its Facebook page.

For more before, during, and after photos of Kyle's project efforts, visit the troop's online photo album.
at May 01, 2016