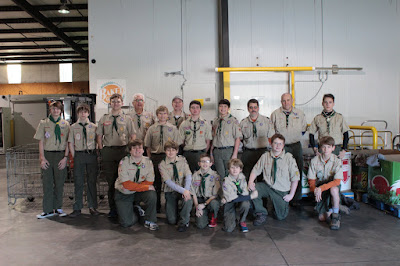 On Saturday, Feb. 27, while Saugahatchee District packs and troops “scouted” for food throughout Lee County, Troop 50 Scouts and leaders assisted the Food Bank of East Alabama by unloading, weighing and sorting food donations as they arrived at its warehouse. This year marked the third year the troop provided warehouse support for the annual Scouting for Food drive.

Scouts worked in teams to unload vehicles ladened with food donations as they arrived at the Food Bank. Carts, once filled, were weighed so units would receive credit toward the competition for the district’s traveling Scouting for Food trophy. Scouts then rolled the carts to the sorting area so food could be placed in one of four categories: canned food, cookies, crackers, and other items. 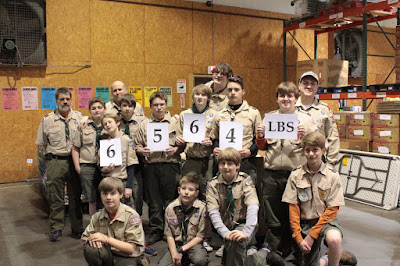 For more pictures from Scouting for Food, visit the troop’s online photo album.
at February 28, 2016