Start of a new adventure...


Troop 50 began their trip to Camp Sequoyah with clear skies and a week of fun to look forward to. We arrived at camp about 1:00 pm and began the check-in guided by Sequoyah staff member Davis Baird, who also happens to be an assistant scoutmaster in our troop. Davis is working as the archery director this summer. Our campsite is named Turkey Flats. Strangely enough, it is neither flat nor home to any turkeys. It is, however, only about 75 yards from the dining hall. A great difference from the long hikes required at Camp Woodruff last year.

We progressed through the different parts of the check-in, which included a dining hall orientation, a medical re-check, and the swim test in Lake Cross. All of the Scouts and leaders took the swim test and all were classified as swimmers. The check-in also included a stop at the camp water fountain, which boasts the coldest water in five counties. With the temperatures well into the 90s today, the cold water and the brief swim were well appreciated.


After a brief chance to unpack and sort our equipment, it was off to the dining hall for dinner. During the roll call of troops on the parade ground, our troop responded with a rousing "War Eagle," which earned the applause of the staff. Meals are served family style in the dining hall and the boys enjoyed a meat and pasta dish, served with a side of green beans. Each of our tables in the dining hall must be set up by our KPs, who also clean up the tables after the meals. This should be good practice for them to continue upon their return home. 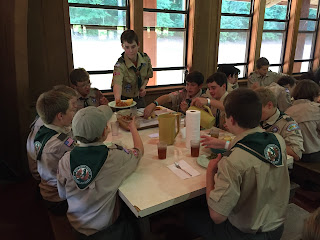 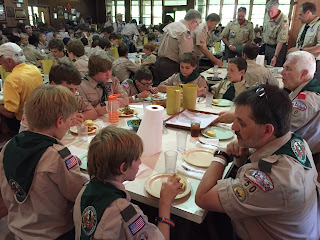 Dinner was followed by various meetings for the leaders and the senior patrol leader. The new Scouts also attended an orientation for the Eagle Bound program that they will start in the morning. Other Scouts engaged in various games around the parade field or visited the trading post to start spending their money. The opening campfire (which did not really have a campfire) featured an appearance by Elvis but did not rise to the standard of Woodruff's opening, which included water skiers and fireworks. Following a brief troop meeting to go over the schedule for tomorrow, many of the Scouts headed to the showers and then to bed. Another adventure begins on the morrow.

More photos are available in the online photo gallery.