A Eagle is Cheerful

Another Eagle Scout ceremoniously received his rank at a Troop 50 Eagle Court of Honor on Sunday. Family and friends gathered with the troop at Holy Trinity Episcopal Church in Auburn to celebrate as Vincent Chu was awarded the Eagle rank. Following an opening by the Senior Patrol Leader, Will, an invocation was offered by Father Geoff Evans, the rector of Holy Trinity. The Scoutmaster then shared some comments about Vincent's journey to Eagle. Vincent was a Cub Scout in Pack 800 with Mr. Baird serving as his den leader. It was noted that Vincent is the epitome of cheerfulness. No matter what he is doing, he is always smiling. Mr. Baird even shared a photo of Vincent collecting food bags as an eight-year old Bear Scout. His cheerfulness has always endured, even when confronted with setbacks or unexpected obstacles. 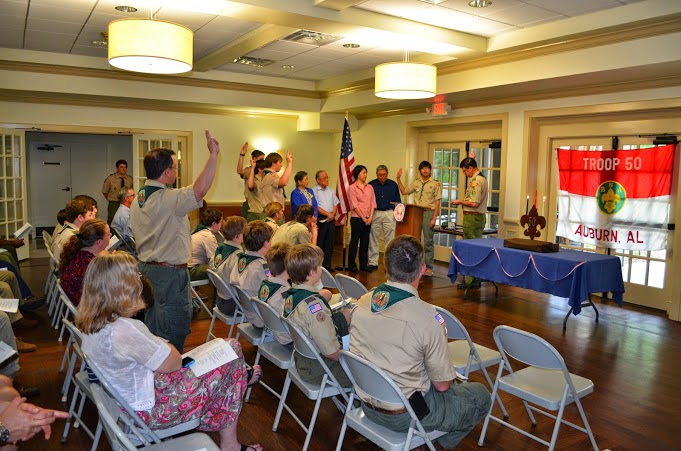 An honor guard of Scouts from Troops 50 and 29 spoke about the symbolism of the Eagle badge and Mr. Tullier challenged Vincent with the Eagle Scout Charge. Mr. Baird invited all Eagle Scouts to join in the Eagle Scout Promise as Vincent ceremoniously joined the fraternity of Eagle Scouts across the nation. His mother then proudly pinned on his Eagle medal. 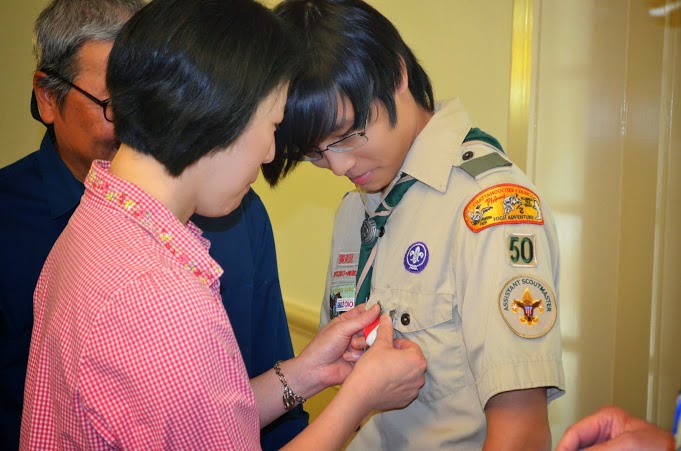 Mr. Stanford presented Vincent with his Eagle neckerchief slide and a membership in the National Eagle Scout Association as a gift from the troop. Vincent offered his thanks to everyone in the room for helping him to reach his goal. Although he presented mentor pins to Mr. Tullier and Mr. Baird, he noted that many people in the room had served as mentors to him in one way or another.


A reception followed the ceremony and those in attendance offered Vincent their congratulations not just for his Eagle but also for his upcoming high school graduation. The future looks bright for Vincent and we are sure that he will face it with a smile on his face.

More photos are available in the online photo gallery.