Finishing what he started

Senior Patrol Leader Andrew opened the ceremony by offering some background of the meaning of the colors used in the American flag, then the traditional recitation of the Pledge of Allegiance, Scout Oath, Scout Law, and prayer. An honor guard comprised of Assistant Scoutmaster Davis Baird and Scouts Jake, Vincent and Ethan -- several of whom trace back to Jeffery's days as a Cub Scout, -- first escorted Jeffery, then his parents, to the place of honor. Jeffery's father and Assistant Scoutmaster Keith Geiger administered the Eagle Promise, and was joined by the troop's Scouts and leaders who had previously attained the Eagle Scout rank. Jeffery's mother, Amanda, presented Jeffery with his Eagle Scout medal, and his father presented Jeffery with an Eagle Scout neckerchief slide. Jeffery in turn presented his mother and father with Eagle Scout parent pins.

Michael Tullier, the troop's chartered organization representative, presented Jeffery with a membership in the National Eagle Scout Association, which was sponsored by the troop. Troop Committee Chair Rob Stanford presented him with a position patch for his new position as a junior assistant scoutmaster in the troop. Jeffery then expressed his appreciation to his parents and friends, and presented Eagle Scout mentor pins to Scoutmaster Andrew Baird and Assistant Scoutmaster Jason Smith. He credited each with being a constant source of support throughout Scouting, and thanked Mr. Smith for always reminding him to "finish what you started."


Chaplain's Aide Davis closed the ceremony with a prayer, and those in attendance adjourned for cake and fellowship. 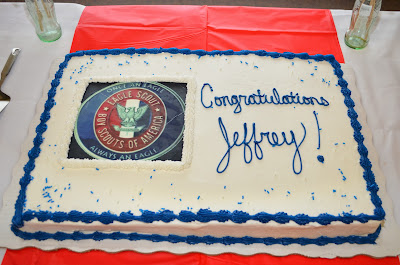